Project List
This list highlights the variety of projects AFS has had an opportunity to
be part of over the last 20 years of operation. 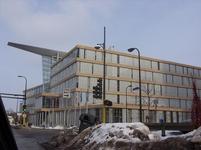